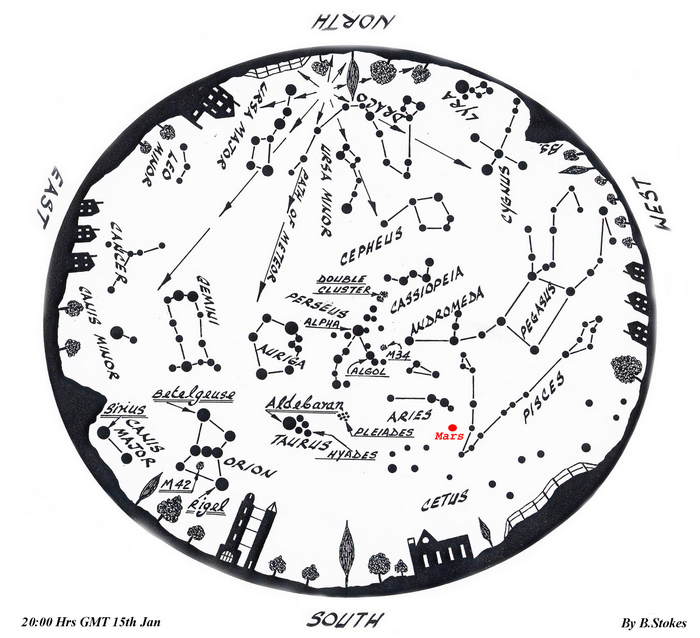 
To use the star chart: print it out and then use it to locate the planets and constellations at night by holding it above your head and pointing the 'South' pointer of the chart southwards.

Ian Morison tells us what we can see in the Northern Hemisphere night sky during December 2020.

Highlights of the Month

During this apparition, Mar's southern hemisphere is tipped towards the Earth and so the South Polar Cap should be visible, though much of its frozen carbon dioxide will have vaporised during the Martian summer. Though the North Polar Cap is beyond our view, one should be able to spot the haze of the North Polar Hood lying above the northern limb of the planet. At 24.6 hours long, the Martian day is similar to ours, so the surface details remain similar at the same time each night. Mars takes 41 days to make an apparent rotation as seen from Earth.

Haritina Mogosanu and Samuel Leske from the Carter Science Centre in New Zealand speaks about the Southern Hemisphere night sky during December 2020.

Jupiter is the brightest object after sunset, low in the west. Saturn is close to Jupiter, above and right of it at the beginning of the month. Mars is due north at dusk, still beautiful and bright. The three brightest stars in the sky are also visible at the same time: Sirius, the brightest true star is midway up the eastern sky, Canopus, the second brightest star, is high in the southeast and Alpha Centauri, the third brightest star is due south.

Back to home
© Swansea Astronomical Society 2021       Theme by freewebtemplates.me       PHP code by Gaynor